Info and bio.
I'm Australian, 42, and I live in Japan. Between 2008 and about.... 2013-14?-15? 20?, I made satirical videos of questionable quality on the topic of Christianity and posted them on Youtube. In 2013 my wife and I started a family, and time-management priorities shifted away from making videos. This bio is about the videos, though, not my reasons for no longer being active, so let's focus on them.
It started in 2008 with me, for reasons that escape me now, writing a fictional dialogue between a man and Yahweh, expressing many of the problems I saw within Christian theism. I put the Yahweh character in the position of needing to answer for the inconsistencies and craziness. It was fun, creative, challenging; it developed into a script, then into an inexpressibly low-rate cartoon made with MS Paint, Audacity (audio), and Windows XP Movie Maker. Hey, presto!~ I'd made a little movie. ("Conversation with Yahweh", 2008. I'm not even going to link to it, it's so bad.)
I posted it on Youtube under a ridiculous username that I came up with on the spot (referencing an analogy that I'd heard (I think) Sam Harris make: "We don't have a word for non-stamp collectors, so why do we need a special word for non-believers?"), and fully expected that video to be the only one I would ever make. I was SO excited to see that it had something like six views in its first day. Within a couple more days, it got its first comment! Wow, this was fun. I figured I could make some more,... "Shit, I wish I'd chosen a better username..."
Amazingly, the floodgates were opened, and more and more and more ideas came for more videos. So far there have been been about 55, which, combined, have had over 23,000,000 views.
Scribbling out that dialogue; literally in red pen on the back of an envelope, back in mid-2008, I could never, ever have imagined what I was starting. I like to reflect on that memory in light of the literally hundreds and hundreds of messages, comments, and emails I've received over the years from people crediting my videos with profoundly changing their lives. It's surreal. 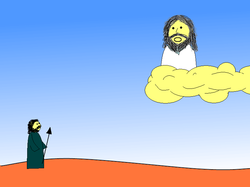 In my videos, I don't argue that "God" doesn't exist. I'm not concerned about proofs, or likelihoods, or probabilities, of there being a "God" or not. Maybe there is/was a creative or causative force, though I would not argue for that being the case, and I have absolutely no idea of the nature of what such a "force" might be. It seems quite reasonable to me that the universe had a beginning and even a cause. I've got no problem going there whatsoever. None.

I argue against the idea that the Bible has anything to do with truth in answering such questions, and that it is utterly redundant in the areas of divinity or spirituality. Yes, it provides answers to some of life's questions,... but are they good answers? Hell no. They're shit, and if you think they're good, then I'd suggest that you haven't read widely enough. Not only are the answers it contains bad, but on balance, the Bible is a demonstrably revolting piece of writing. It is so full of murder, revenge, punishment, war, and bigotry that it amazes me that anyone can even mistake it for being in any way "holy". It offends most of the ethical values that post-enlightenment humanity seems to have arrived at, and the fact that it is defended and revered despite that is indicative of something having gone awry.

I used to be a Christian, in very simple, middle-of-the-road churches in Australia. As a teenager I gave my life to Christ, with tears rolling down my cheeks, but over the course of several long, miserable years (that felt like an eternity) of questioning and doubting, I lost my faith. It was devastating, but eventually I came to realise that I had gained reason. To cut a very long and complicated deconversion story short, I simply could not square my beliefs with my reality. I couldn't do it. It just didn't work - the reality of the world that I lived in, and the reality of my experience that I lived every day just didn't square with the promises and claims of scripture and theology. For many years, I didn't do much about my atheism, until I stumbled across Hitchens, Harris, and Dawkins making the case AGAINST religion around 2006 and realised the detrimental influence that Christianity has had, and continues to have in the world. I now believe that Christianity, and religion generally, is worth standing against. 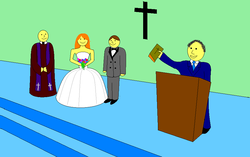 Ken Ham tells his audiences that they HAVE TO believe in the literal and historical truth of Genesis, because if the Old Testament is false, then it stands that the whole thing is false. I agree with him completely, and figure that this principle is perhaps the only truth he has ever uttered from the pulpit. Yes indeed, if the Bible is NOT the one and only, perfect, divinely inspired message from the creator of life and the universe, then the Christian religion tumbles in on itself. I believe that the Bible is WOEFULLY inadequate in living up to a claim of "divine authorship", or even influence, and therefore that anyone who uses it as a focus of their life, or a source of "eternal" truths and ethics, is terribly deluded. I invite those who would demand at this point that I name the standard by which I'm judging scripture, implying that as an atheist I'm ill-equipped to do so, to share with us all the standard by which THEY judge scripture - and to give a non-circular answer. (For a more detailed put down of this pathetic apologetic retort, see my 14-minute video essay "Christian Apologetics: Hitler can't help you.")

Through my videos, I hope to have people question whether the Bible is JUST SO GOOD, so PERFECT, so WISE, so ACCURATE, and that the character of Yahweh is so BEAUTIFUL, so LOVING, so JUST, that the text itself cannot have been written by human beings alone, without godly influence.
Indeed not. The Bible bears the stamp of its lowly origins - the imaginations of iron-age, superstitious, bloodthirsty war-mongers, determined to conquer and kill all the enemies they could, and all too willing to install fear and guilt into the hearts of their superstitious, gullible people, so as to more easily claim divine authority for appalling acts of cruelty and barbarism.

As for Jesus - yes, there's no doubt he is an amazing improvement upon Yahweh (except the minor detail about him announcing the eternal torture of the dead, which doesn't get mentioned in the Old Testament). But--- if Yahweh fails to meet the standard of being holy and perfect above anything an iron-age human mind could invent, then Christ's being the son of this imaginary character fails to be very meaningful. And besides, the best bits of what Jesus is recorded as having said were being said long before him, in places such as China and India. Many of the recorded sayings of Jesus, and indeed his biography as historians view it, reflect an apocalyptic message, suggesting that they were intended for a generation that was about to witness the end of the world, and thus taking no thought for the morrow, for example, makes little sense today. New testament history is absolutely riveting, and at one stage I began making serious enquiries into studying it at a post-graduate academic level, but alas,... no time or money for such an endeavor.

minorDo you find my videos offensive? Well, I'm offended that throughout history, and even still today, people have been, and are being, paralyzed with fear of being condemned to an imaginary torture chamber after death- indoctrinated from childhood that they are dirty, stained, unacceptable, and that they need mercy and forgiveness from their utterly disappointed maker, and that nothing they can humanly do can save them from having endless pain and suffering inflicted on them for the crime of being born human.

I'm offended that people I know, love and respect have had these dishonest ideas put into their heads, and had it influence their choices ALL their lives, constantly weighing their thoughts and actions against the desire to please the imaginary master who alone can rescue them from the imaginary torture that He Himself threatens to dole out.

I'm offended that reasonable, ethical people are compelled to even try to square their beliefs about the holiness of the bible with its actual revolting contents, compromising the morality that is innate in them, with ideas like "Well, stoning people to death wasn't ALWAYS all that bad, it used to be actually holy... and murdering innocent children IS ok (and holy) in some contexts after all". WTF?

Make no mistake about it - your religion is EXTREMELY offensive; it is an insult to human dignity, and I look forward to its demise, and am immensely proud of any tiny contribution I can make towards it.